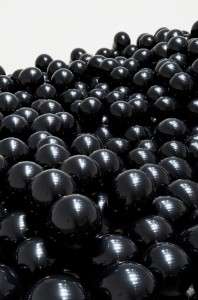 No more envying the kids in the ball room at IKEA. The National Gallery has a new work of contemporary art that’s sort of an adult version of a ball-filled room, with a subtext of deep thinking.

The installation is titled Work No. 202: Half the Air in a Given Space, and it’s byMartin Creed, who won Britain’s sometimes-controversial Turner Prize in 2001 for Work No. 227: The Lights Going On and Off, which was an empty room in which the lights went on and off. Some critics said it wasn’t art at all. One artist was so outraged she threw an egg at it.

WATCH THE VIDEO!  It is lovely.