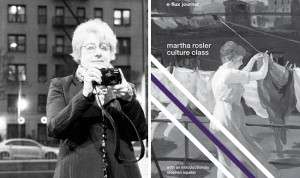 The influential but oft-maligned project of pop urbanist Richard Florida first took off in 2002 with the publication of The Rise of the Creative Class, in which he defined a new economic sector composed of creative laborers: a group extending beyond artists to include designers, journalists, and tech people, a “highly educated and well-paid segment of the workforce on whose efforts corporate profits and economic growth increasingly depend.”

Roslery opens with a question that feels both obvious and deeply uncomfortable: Does choosing to be an artist mean aspiring to serve the rich? In 2013 it seems a given that artistic experiments in the use of space devised to subvert this destiny — and, ultimately, engage in radical social change — have been in turn assimilated by the long arm of capitalism, a process she historicizes in the chapter “Take the Money and Run?