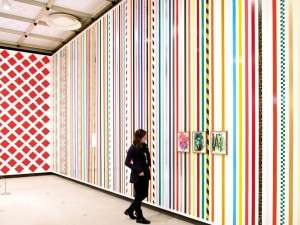 When Martin Creed was shortlisted for the Turner Prize in 2001, it showed him something about himself that he’d rather not have seen. “What I hated was finding out how much I wanted to win,” he says. “Prizes are stupid but God, I was a desperate man!” It’s an uncharacteristic admission in some ways—Creed casts himself as an idiot savant rather than an ambitious hustler—but it is typically disarming. He is a master of the confessional interview.

It was a relatively strong field that year and the favourite was Mike Nelson, creator of eerie architectural installations assembled from everyday jetsam including magazines and furniture. Creed’s piece, Work No. 227: The lights going on and off, consisted of an empty room whose lights flick on and off at five-second intervals. Minimalist enough to mean everything and nothing, it was met with an outraged reaction from all the usual quarters. The Sun outdid itself, launching its own award, the Turnip Prize, and a painter named Jacqueline Crofton was banned from the Tate galleries for life after chucking eggs at the exhibit’s white walls.

Flash forward 13 years, and Work No. 227 is part of the Tate’s permanent collection, acquired for an estimated £110,000, while Creed himself is on his way to becoming a national treasure. Last year, he took part in the Cultural Olympiad, and January saw the opening of his first major retrospective, “What’s the point of it?”, at the Hayward Gallery. The exhibition contains more than 160 works, from sculpture and painting to video and neon. Not content to stick within the confines of the gallery’s five rooms, Creed has spilled out onto the terraces and into the Southbank Centre’s performance spaces with a ballet, a gig played with his band, and the premiere of a composition for the Royal Festival Hall’s newly restored organ. There’s an album, too. And of course, there is full-frontal male nudity, vomiting and defecation.