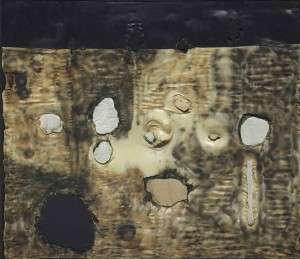 Of the very large number of offerings in the auction—109 lots—just 23 failed to sell, for a buy-in rate by lot of 21 percent and 14 percent by value. Fourteen lots sold for over a million pounds and twenty-two hurdled the one million dollar mark. Remarkably, thirteen artist records were set, leaving the strong impression that Arte Povera has moved several notches higher in the Blue Chip food chain.