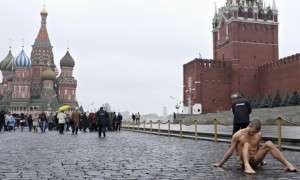 On a snowless but chilly afternoon early in the Moscow winter, a 29-year-old man with a gaunt, emaciated face stepped on to the vast expanse of Red Square. He made his way to a spot on the cobblestones not far from the marble mausoleum housing the waxy corpse of Vladimir Lenin, and began to undress. In less than a minute, he was naked.

A video taken using a handheld camera and posted online moments later shows tourists gawping as he sits on the ground. A police car arrives, and an officer orders the man to get up. But the man cannot get up – because he is attached to the icy cobbles with a single, long nail that is driven through his scrotum and into the stones below.

One Response to Petr Pavlensky: why I nailed my scrotum to Red Square