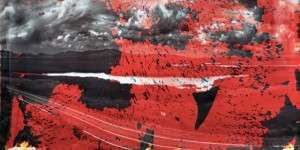 What’s the connection between a looped high-def video of a carving knife, a row of tall, narrow convex black mirrors, and a hundred-foot-long scroll swarming with shimmering iridescent colors? They are all photographs according to no less an authority than the International Center of Photography (ICP), where they are featured in the exhibition “What Is a Photograph?” on view through May 4.

ICP curator Carol Squiers‘s engagement with the bedeviling question focuses primarily on the 30 years since my photo class, the period in which digital technology has eliminated both film and the darkroom from the practice of many photographers. As Alison Rossiter, one of the artists included here, said recently when talking about the string of technological innovations that make up photography’s history, “we get to witness the biggest one, where—whhhpp!—the whole light-sensitive thing was thrown out.”