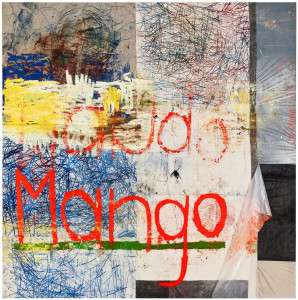 LONDON — Before a standing-room crowd at Christie’s here last month, the bidding opened on an abstract painting filled with black scratching, “Burrito” scrawled across the top in bright yellow. The auctioneer announced that there were already 17 telephone and absentee buyers vying for the canvas, made three years ago by Oscar Murillo, who just turned 28.

While Mr. Murillo is little known outside clubby contemporary art circles, and he has his share of skeptics, his fans have called him “the 21st-century Basquiat.” That night, after fierce competition, “Untitled (burrito)” sold for $322,870, more than six times its high $49,000 estimate. Only two years ago, Mr. Murillo, who was born in Colombia, was waking up at 5 a.m. to clean office buildings to cover his expenses at the Royal College of Art in London. Now, he is represented by David Zwirner, one of the world’s most prestigious galleries, and when a choice canvas comes up at auction or through private sale, it can fetch more than $400,000.