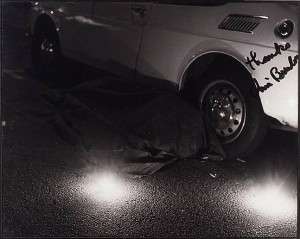 Chris Burden
In 1972, visitors attending Burden’s show at Mizuno Gallery in Los Angeles were treated to what appeared to be a crime scene, with a covered cadaver lying on La Cienega Boulevard, surrounded by police flares. In fact, it was the artist himself “making a piece of sculpture,” as he later put it. He was arrested for sparking a false emergency, and after three days of deliberation the jury failed to reach a decision and the judge dismissed the case. In the end, the ordeal granted Burden a degree of infamy that ultimately helped his career.