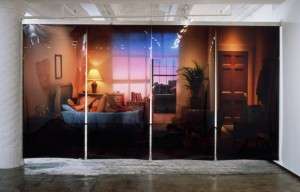 Michael Snow is an unusual case of an artist best known for his least conventionally accessible works. Snow’s legacy will always be defined by in his groundbreaking structuralist films, especially the 1967 masterpiece Wavelength, even as opportunities to experience those works as they were meant to be seen become increasingly rare. (Snow has wryly addressed this phenomenon with the digital re-cut WVLNT (Wavelength For Those Who Don’t Have the Time) in 2003). However, the 84-year-old artist has a wide-ranging practice that includes painting, sculpture, photography, installation, and experimental music.

Snow has been tirelessly active in the art world for more than half a century, and yet much of his work remains little-known and under-appreciated—in part because he’s never slowed down enough for his various bodies of work to be fully assessed. This makes his oeuvre particularly ripe for “rediscovery” via retrospectives in major institutions justifiably eager to celebrate Snow’s diverse achievements for a wider public. In 2012, the Art Gallery of Ontario showcased Snow’s sculptures with its lauded exhibition “Objects of Vision.” Now, the Philadelphia Museum of Art’s “Photo-Centric” shines the spotlight on a selection of his photographic work from 1962 to 2003.