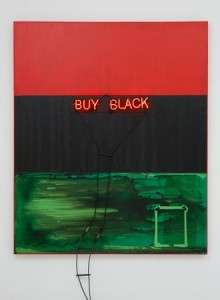 There are two shows currently taking place in New York that regard Obama as a touchstone. The first is Michelle Grabner’s festive floor at the Whitney Biennial, where the president stares with distinguished self-possession into the lens of photographer Daywoud Bey. Young and commanding, this is Obama before the announcement of his candidacy in 2008. The moment marks a progressive direction forward for the country, and, serving as a mantle above Grabner’s curatorial text, for American art today.

Downtown, another show called “Black Eye” at 57 Walker Street curated by Nicola Vassell, the previous director of both Pace Gallery and Deitch Projects, also evokes the age of Obama. But unlike Grabner, Vassell is not tapping into the dewy optimism that accompanied Obama’s first inauguration. Instead, she cites his sobering reelection in 2012 as the show’s genesis: the second time around, she recalls, there was still pride, but also a diminishment of expectations. The crush of the political system in Washington had stamped out the nation’s sense of unfettered possibility.