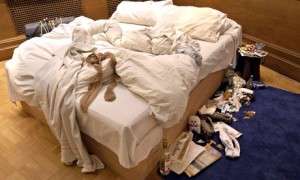 The furore around the work, complete with vodka bottles and pregnancy tests, helped to give lift-off to Emin’s career.

Few pieces of art have divided opinion quite like My Bed – in whichTracey Emin claimed to have spent a week after a bad break-up.

Complete with vodka bottles, cigarette butts and pregnancy tests, the installation didn’t win the Turner prize during the year of its entry in 1999; she lost out to another young Londoner by the name of Steve McQueen.  Nevertheless, the furore helped to give lift-off to Emin’s career as one of the most successful British artists of her generation, sparking a media frenzy and causing visitor numbers to the Tate Britain to hit record highs.