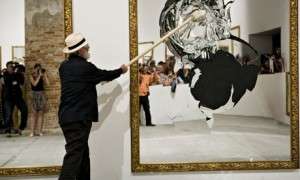 Pistoletto shook up the 60s with his arte povera revolution. What’s the legendary mirror-smasher doing now? Designing houses made of rice at his eco HQ.

Born in Biella in 1933, Pistoletto grew up under fascism. “You had to believe – in God and in Mussolini. I felt there was a terrible contradiction in believing in a system producing hate, producing massacres. After the war, Italy saw the rise of both capitalism and communism. You had to believe in one or the other. Discovering modern art was, for me, an illumination. Now I could think rather than believe.”

After 1945, Italian culture embraced realism. It was as if all the lies of the Mussolini age could be purged only by a harsh blast of pure truth. In cinema, this led to the likes of Rome, Open City and The Earth Trembles (La Terra Trema). Meanwhile, the 17th-century realist painter Caravaggio was rediscovered – and a young artist called Michelangelo Pistoletto started to appropriate mirrors, painting directly on to their surfaces. “Everything in my work has come from the mirror,” he says, “and the idea that it reflects society and reality.”