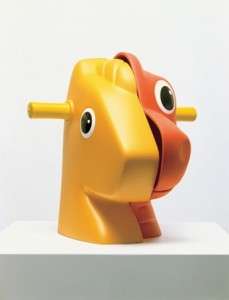 Everything about the Jeff Koons retrospective at the Whitney Museum of American Art is over-the-top. That includes the press-conference-cum-love-in that opened Tuesday’s media preview, during which museum director Adam Weinberg whipped himself into a subdued but hyperbolic frenzy, rhapsodizing about how Koons’s artistic career had a partial genesis in a 1974 Jim Nutt exhibition Jeff saw, age 19, at the Whitney; calling Koons “one of the defining artists of our time”; and rattling off the many ways in which his career has been a “study in contradictions,” with work that ping-pongs from one polarity to the other (“accessible yet esoteric… innocent and erotic…”). Curator Scott Rothkopf was up next, delivering lines that, out of context, might cause any Martian visitors in the audience to wonder what the hell this peculiar human race was getting up to (we’d soon see, he explained, that “the balloon dog had company with the mermaid-troll.”) Koons himself took the podium among the click-clack of cameras, discussing his career in terms of a journey, explaining that art has “taught [him] how to feel” and enabled him to “become a better person.” He was enthusiastic and polite, as if he were dedicating a ship. The ship was Jeff. And then we were off, scattering through four floors of “the great Koonsian adventure,” in Weinberg’s summation.