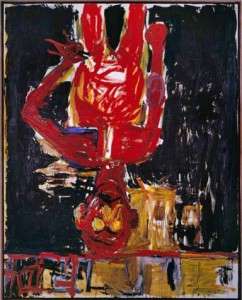 BASEL, Switzerland — The 45th edition of Art Basel, Europe’s premier modern and contemporary art fair, opened to an elite group of art world players with a big bang of serial sales, indicating the continuing strength of the global art market.

There appeared to be a genuine hunger for quality, as evidenced by the modestly scaled Gerhard Richter “Abstraktes Bild” from 1997, at New York’s Dominique Levy Gallery, which sold for “north of $6 million,” according to Lock Kresler, who will run Levy’s new operation in London’s Mayfair next year. The Richter appeared in the 1987 Venice Biennale and at the artist’s solo show at the Anthony d’Offay Gallery in London in 1998. “Three or four people were seriously looking at it,” said Kresler, before one of them pulled the trigger.