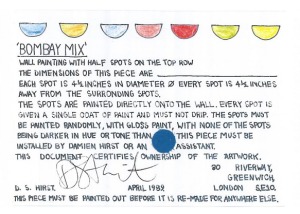 An early Damien Hirst painting titled Bombay Mix has become the source of controversy London, reports the BBC. The artist is blocking the sale of the piece, claiming that his company, Science Ltd, still holds the certificate for the spot painting, which was painted directly on the wallpaper of a London house in 1988, and is therefore the piece’s owner.

Originally a birthday gift for the owner of the house, Jamie Ritblat, from his parents, the painting stayed behind when the home was later sold. In a statement, Science Ltd claimed that Riblat gave back the certificate authenticating the work “a number of years ago.”

Meanwhile, Jess Simpson, who has owned the home with her husband Roger since 2005, has removed Bombay Mix, mounted it on an aluminum backing board, and framed it in the hopes of selling it. In doing so, she has run into firm opposition from the artist and his team.

“We’re not really into Damien Hirst so we didn’t really think it’s a fantastic piece of art that we can keep; we thought ‘what are we going to do with it?’” she told the Telegraph.