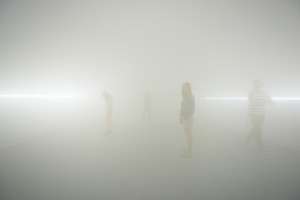 “Scanner Room” – an installation designed specifically for the gallery space that engulfs this space completely, creating an environment constructed by light and filled with it. The form is minimalist, its most important element is a constant, monochrome flow of light that materializes and diffuses itself subsequently. The space has been created for people to be inside it; and in this case the visible is only the beginning of an individual experience that may be colored with different emotions and states of consciousness.

Usually, scanning is used to represent images or to read encoded, written messages. Therefore, overexposure to light may be treated as a kind of a potential introspection, a state of concentration, a meeting and exchange with one’s own self. Its intensity develops with time and may get you close to meditation, but it can also take the form of a momentary flash of light, a transient feeling or image. The Artist often tries to reduce the initial idea of her artwork, searching for its optimum form based on clarity, simplification and focus. Similarly to her previous works: Cave, Iridescent and Enter me, she designs a space of experience constructed at the intersection between visual, architectural and sculptural actions.

Watch the vimeo Video and