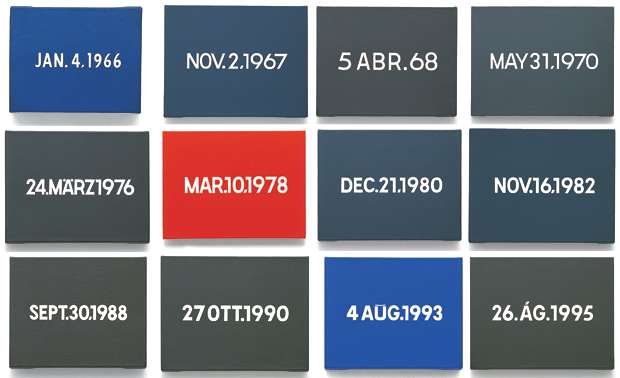 On Kawara, a Conceptual artist who devoted his career to recording the passage of time as factually and self-effacingly as art would allow, died in late June in New York City, where he had worked for 50 years. He was 81.

Working in painting, drawing and performance, Mr. Kawara kept himself in the background and almost never gave interviews. The rare published photographs of him showed him from the back. Toward the end of his life, he stopped attending his own openings.

He belonged to a broadly international generation of Conceptual artists that began to emerge in the mid-1960s, stripping art of personal emotion, reducing it to nearly pure information or idea and greatly playing down the art object. Along with Lawrence Weiner, Joseph Kosuth, Hanne Darboven and others, Mr. Kawara gave special prominence to language.

Keeping the viewer focused on time’s incremental, day-by-day omnipresence was one reason for Mr. Kawara’s deliberately low profile and his habit of listing his age in exhibition catalogs in terms of the number of days he had been alive as of the show’s opening date. In the catalog to a show at the David Zwirner Gallery, an otherwise blank page titled “Biography of On Kawara” put the count at 26,192 days on Sept. 9, 2004. Last week the gallery calculated he had reached 29,771.