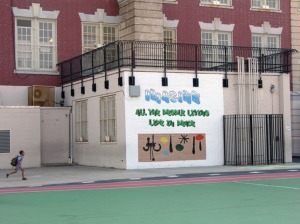 New York artist Jamian Juliano-Villani is being accused by another artist of having sticky fingers. Brooklyn’s Scott Teplin sees too much similarity between a small painting by Juliano-Villani, now on view at West Village gallery Gavin Brown’s Enterprise, and a painting of his own.

It’s important to realize that all visual culture is fair game for artistic content, ‘appropriation’ isn’t a ‘kind’ of work, it’s almost all art. When making a painting or a print or a sculpture, it’s nearly impossible to make something without thinking of something else. A good reminder that when dealing with images 1) once an image is used, it isn’t dead. it can be recontextualized, redistributed, reimagined. 2) It should have several lives and exist in different scenarios.