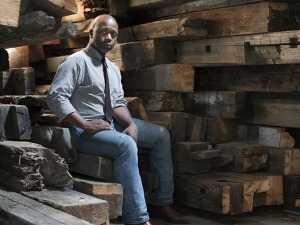 Gates made his name by staging soul food dinners in honour of a fictional Japanese potter. Now he is recycling the fabric of Chicago’s past, including its bricks and mortar, to transform the city’s depressed areas.

In 2007 Theaster Gates held a series of soul food dinners on Chicago’s South Side to honour his mentor, Yamaguchi, a gifted Japanese potter who fled Hiroshima for Mississippi, where he had heard there was a special kind of clay. There Yamaguchi married a black woman and created a unique ceramic style by blending Asian and African-American techniques. They built a pottery, and brought people together to talk about equality. To Gates, who had spent some time studying in Japan, he bequeathed the task of “fostering social transformation” by “convening dinners in cities with extreme racial and social tension just beneath well-articulated geographical boundaries”. On the wall, in an 85ft strip of vinyl, was a timeline that covered everything from the Ming dynasty to slavery, including Yamaguchi and Gates’s birthdays. At the table was Yamaguchi’s son, representing his father and endorsing Gates’s efforts.