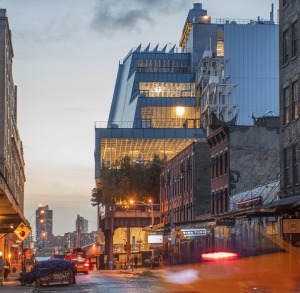 The Whitney Museum of American Art’s Meatpacking District museum, opening May 1, is fiercely awaited. In its new building, designed by Renzo Piano, the galleries and sculpture gardens will nearly double the museum’s previous exhibition space, with two floors devoted to showing off its collection. The museum expects to take in spillover from the millions of yearly visitors who regularly traipse the High Line. Yet, despite having made the kinds of changes that often unleash torrents of criticism (take a look at how the public responded to the MoMA’s and the Frick’s planned expansions—see MoMA Moves Forward with Folk Art Museum Demolition and “Save the Frick” Petition Racking Up Signatures), museum insiders we spoke with are, surprisingly, unanimously bullish on the museum’s move and amplified digs.

“The only way to think is to think big,” former Museum of Modern Art curator Robert Storr told artnet News by phone from his office from Yale University School of Art, where he is the dean. “The Whitney is doing everything necessary to prepare the ground for them to land well.”