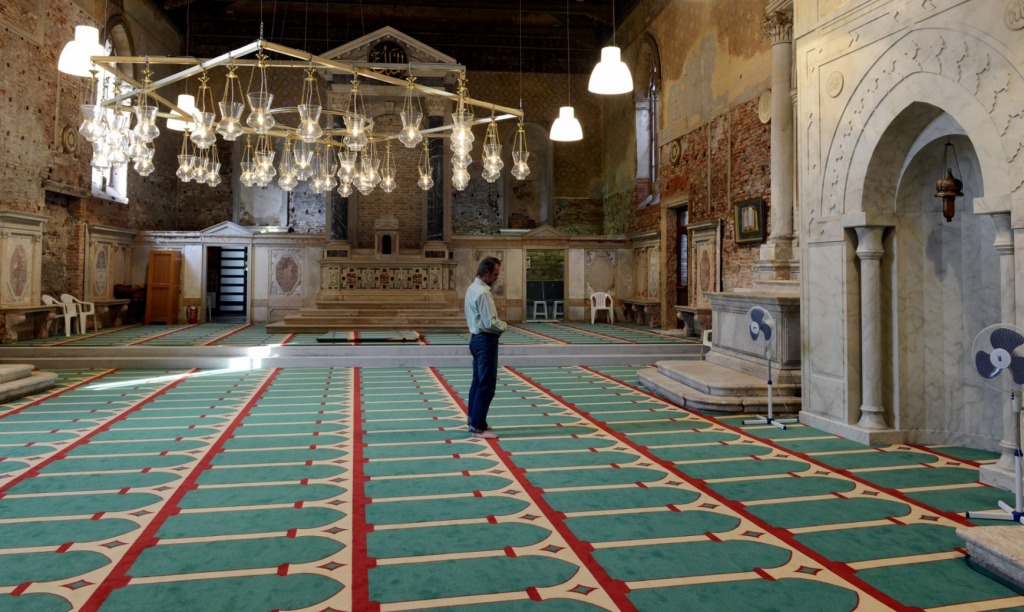 In a tranquil corner of Venice’s Cannaregio district stands a handsome church with an icing sugar white baroque facade. Its origins stretch back to the 10thcentury, but the last mass was celebrated here in 1967, since when, deconsecrated and in private hands, it has stood silent and unused.

On 9 May, however, as the 56th Venice Biennale opens, Santa Maria della Misericordia will become a religious and public space once more: reborn as a mosque, the first in the city’s long history. Venetian Muslims, as well as Muslim visitors to the city, will now be able to walk to Friday prayers instead of taking an hour-long trip to the nearest mosque, in the industrial heartlands of the Veneto mainland. Behind the venerable doors of the church is now a recognisable mosque, complete with wudu area to wash in, prayer carpet, mihrab – indicating the direction of Mecca – and calligraphic cartouches.

The Mosque is the official national pavilion of Iceland at the biennale, and the artist behind the transformation is the Iceland-based, Swiss-born artist Christoph Büchel – whose previous artistic projects have included the transformation of a grand gallery on Piccadilly in London into a fully functioning community centre.

One of the most controversial and highly anticipated national presentations at the biennale, the project is, said Büchel, anchored in Venice’s historic connections with the east. It was in this city, for example, that the first printed edition of the Qur’an was made in the 16th century; and the Fondaco dei Turchi, an elegant palazzo on the Grand Canal, was once the city’s ghetto for Ottoman traders.