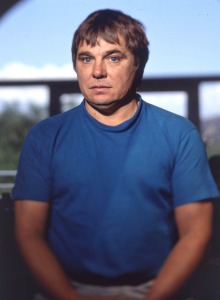 Our final (so far) column on Chris Burden, by Peter Schjeldahl – you should read it.

Burden adventured alone in wilds that aren’t outside civilized life but that seethe within it. He coolly structured convulsive experience.  His mastery of form made him a poet, as in a piece that I knew from hearsay and wrote about, for The Village Voice, in 1981:

Last year Burden invited a group one afternoon to the palisades in Santa Monica overlooking the Pacific. There a powerful telescope was set up, directed by an assistant. Looking through it, they saw, far out to sea, someone (Burden) paddling a kayak in a dazzle of light from the declining sun, a lone, tiny, laboring silhouette appearing and disappearing in the sparkle. This went on for exactly two hours. Then the telescope was whisked away and everybody went home.

Burden is still paddling out there, in my mind’s eye. It was too much to expect that, even being dead, he would be gone.