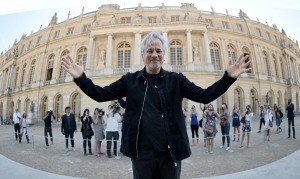 The huge installations by the artist inspire both admiration and disapproval and his latest work, Dirty Corner, at Versailles is causing more discord than ever.

Like some corporate-sponsored mega rock band on a mammoth world tour, there is a type of international artist whose epic-scale installations are must-see events in a string of major cities. One such visual superstar is the Indian-born British sculptor Anish Kapoor, whose grand projects tend to be discussed in terms of their dimensions: height, length, tonnage.

His large signature sculptures have been seen in New York, London, Chicago, Istanbul, Jerusalem and Delhi, among other places. On Tuesday, his latest work officially goes on view at the Chateau de Versailles outside Paris.  It is in these immaculate gardens that Kapoor has set Dirty Corner, a massive steel funnel with limbs of broken stone that the artist described in one French publication as “le vagin de la reine qui prend le pouvoir” or, excuse my French, the vagina of the queen taking power.