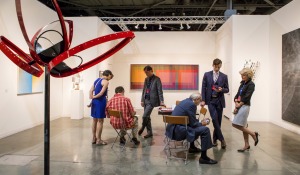 SEATTLE — Paul Allen came ready to shop. Mr. Allen, a billionaire co-founder of Microsoft and one of this city’s major cultural patrons, strolled the aisles of the inaugural Seattle Art Fair on Thursday, looking to add to his formidable art collection.  “Just walking around, I’ve probably seen a half-dozen paintings that I would consider,” he said, taking a break early in the V.I.P. preview. Several staff members and his private art adviser lingered nearby. Mr. Allen had a leg up on other buyers: He founded the fair. A regular visitor to the Venice Biennale, he was inspired to start an art showcase in his hometown that would import a sophisticated, international art scene. After two years of planning, it opened here last week to ardent curiosity.

And Mr. Allen did acquire some work, including a small Wayne Thiebaud pastel of a tin of sardines. “Because I used to eat sardines with my father,” Mr. Allen explained.

New York collector Beth Rudin DeWoody, who came on a whim and wound up buying a half-dozen works from dealers from New York, Los Angeles, San Francisco, Boston and Seattle, including a piece by the local artist Jeffry Mitchell. As for prices, “it was a range,” she said. “I love finding art for under $1,000, which was very possible there.”