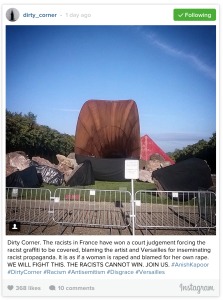 Anish Kapoor returns to Versailles tomorrow, September 22, to commence his artistic intervention on the sculpture Dirty Corner, which has been vandalized three times since its installation in the gradens of Versailles in June.

But the artist, who initially announced that he would leave the massive steel artwork untouched after it had been smeared with anti-semitic slogans in early September, is not acting of his own accord, but rather obeying a court order.

A Versailles court ruled on Saturday, September 19, that the anti-semitic graffiti must be wiped off “without delay” from the sculptures and surrounding stones after right-leaning politician Fabien Bouglé filed a complaint with the local public prosecutor against the artist andCatherine Pégard, president of Versailles, contesting their decision to keep the graffiti as a sign of disgrace and as a reminder of the “dirty politics” that inspired the vandalism.