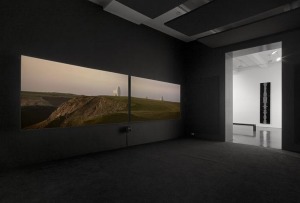 Last Thursday afternoon, I received an email from the artist Trevor Paglen. I’ll respect his privacy and not reveal the contents of the message, or the Gmail account he uses, but I’ll tell you about his sign-off. Instead of the standard message, “Sent from my iPhone,” or some cute variation on that along the lines of “Sent via my carrier pigeon,” Trevor Paglen’s final dash reads “Sent from a tracking device.”

I was looking at the email on my own tracking device, and if the NSA wanted to know what I was doing at that exact moment for some odd reason, it could easily track my Uber and figure out I was headed from my apartment to Metro Pictures in Chelsea, where Paglen’s latest show is currently on view. The show confronts surveillance head-on, with the works displaying a direct approach to the largest domestic spy program in history. Paglen, at times, makes some of the frillier big-ticket shows in the neighborhood seem a bit frivolous.

Paglen has the bonafides to do this kind of thing.