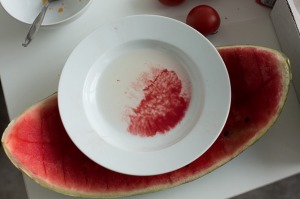 Many of Wolfgang Tillmans’s photographs begin with the German artist asking himself, “Can I do this?” Last week, at a preview of “PCR,” his new show at David Zwirner, in New York, Tillmans pointed out two new photographs of Sunset Boulevard, in Los Angeles, as examples of that process. One of the images is a night scene that he shot in the passenger seat of a car. In it, a billboard for an exhibition of Rolling Stones photographs bears a slogan that seems to say it all about the show’s interest in what Tillmans called “super ‘now’ moments”: “It’s just a shot away.”

“To take a picture from a car at night should be an impossibility without flash,” Tillmans said at the preview. “In a lot of these pictures, there’s some aspect of new technology. These pictures, for example, would not have been possible ten years ago.”