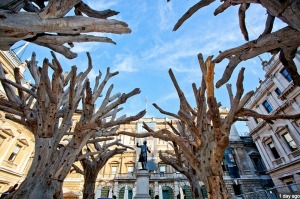 Having settled in at the RA, Marlow is about to launch his first major exhibition: the work of Ai Weiwei, the Chinese dissident artist who was imprisoned without charge in 2011 and released on condition that he should give up his passport. A thorn in the Chinese government’s side for two decades, he has made sculpture, woodwork, photography, video and installations, often on a massive scale, while effectively under house arrest.

The exhibition, described by the London Evening Standard as ‘the most anticipated art show of the year’, is a huge enterprise — a single-artist show that will occupy the Royal Academy’s main galleries, as did the works of David Hockney, Anish Kapoor andAnselm Keifer in recent years — and the first major institutional survey of Ai’s work ever seen in the UK.

‘Why Ai Weiwei?’ asks Marlow. ‘First, he’s one of the most celebrated artists in the world, but few people in the UK have seen his work, aside from his Sunflower Seeds at the Turbine Hall. Second, Royal Academicians have made him an Honorary RA in support of his political position and the restraints on his creative freedom. Third, since he wasn’t travelling, I thought he might have time to do it.’