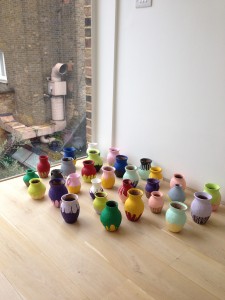 Three-thousand porcelain river crabs clamber over one another in a great red, green and white sprawl of twitching legs and claws. Porcelain sunflower seeds are one thing, crabs another. Good thing they’re not quite real.

This is but one small moment in the largest show Ai Weiwei has held in Britain. Not exactly a retrospective, it is certainly the best show of his work I have seen anywhere, as well as being the best thing I’ve seen at the Royal Academy, London, for years. It is filled with surprises, shocks and tremors. Its effect is cumulative. Those who have doubted Ai’s integrity and seriousness (I have never been among them), or his qualities as an artist, should find plenty to pause at here.

The word for crab, hie xie, is a homonym for harmonious, we are told, and much bandied about in Chinese government circles. There’s not much harmony here among the crustaceans. The word is also used a lot on the internet in China, as slang for censorship. Thinking Ai might shut up after his 81-day incarceration in 2011, and the bulldozing of his newly completed Shanghai studio by the authorities, the Chinese government got it wrong.