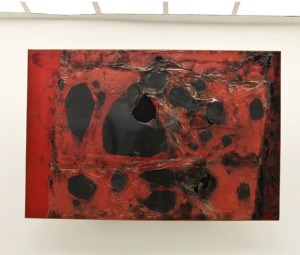 Alberto Burri’s prescient paintings — in patched, burned and otherwise abused burlap, plastic or wood — form a lavish, beautiful and admirable, if sometimes monotonous retrospective at the Guggenheim Museum. It presents an artist who is impressive less for the profundity of his work than for his consistency and his ideas, which remain very much alive even among young artists not familiar with his work.

Critics have long associated Burri’s art work with wounds, scars and various forms of destruction and decay. But for the most part he denied that his wartime experiences inspired his art works, which he emphasized were simply paintings of an unusually physical kind. Nonetheless, the war caused a dearth of conventional artistic materials that at the least brought out Burri’s inborn talent for using scavenged scraps – especially burlap – in physically imaginative, pictorially arresting ways.