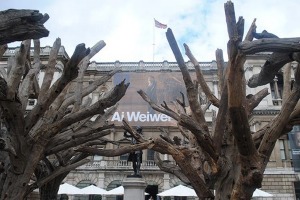 The Royal Academy of Arts is currently presenting a landmark exhibition of the Honorary Royal Academician, Ai Weiwei. Although Ai is one of China’s leading contemporary artists, his work has not been seen extensively in Britain and the Royal Academy is presenting the first major institutional survey of his artistic output. The exhibition includes significant works from 1993 onwards, the date that marks Ai Weiwei’s return to China following more than a decade living in New York. The artist has created new, site-specific installations and interventions throughout the Royal Academy’s spaces.

The exhibition has been developed in close collaboration with the artist, who has taken an architectural approach to the layout of the exhibition, within the Royal Academy’s Main Galleries, befitting the monumental character of many of Ai’s pieces. The artist has virtually navigated the spaces from his studio in Beijing, through video footage of the galleries and architectural plans. The curators have also made regular visits to his studio. Ai regained his passport in July 2015 and travelled to London for the Royal Academy’s exhibition.