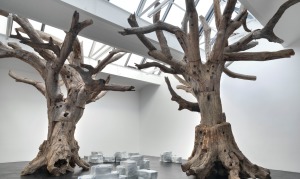 Artlyst recently attended the press view of the Royal Academy of Arts’ landmark exhibition of the Honorary Royal Academician, Ai Weiwei. Where the chief curators of this outstanding show, Tim Marlow, and Adrian Locke were kind enough to give Artlyst – and a host of other journalists – a tour of Ai Weiwei’s impressive retrospective.

The exhibition includes significant works from 1993 onwards, the date that marks Ai Weiwei’s return to China following more than a decade living in New York. The artist works in a variety of different contexts, and scales, transforming materials and meaning as part of his practice. The curators took us on a detailed tour of the artist’s detailed survey, Sadly Ai was not present at the event, wishing his work to speak for itself.

Listen to the podcast.