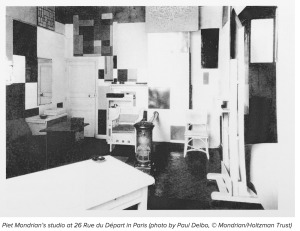 Mondrian wrote in 1927 about his ideas on his rather extreme interior design:

The interior of the home must no longer be an accumulation of rooms formed by four walls with nothing but holes instead of doors and windows, but a construction of coloured and colourless planes, combined with furniture and equipment, which must be nothing in themselves but constituent elements of the whole. And the human being? In a similar fashion, the human being must be nothing in himself, but rather a part of the whole. Then, no longer conscious of his individuality, he will be happy in this earthly paradise that he himself has created.