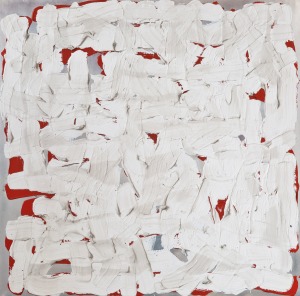 Is Robert Ryman, the master of the white-on-white painting for the past half-century or so, a covert “Light and Space” artist? The Dia Art Foundation’s new exhibition in Chelsea, “Robert Ryman: Real Light, 1958-2007,” certainly encourages us to see him this way—as another example of the California-centric, Minimalism-influenced movement that includes James Turrell, Robert Irwin, and Doug Wheeler and that seems to have attained a broader cultural currency in recent years (to the point where there’s now a Turrell homage in aDrake video).

Per the artist’s preference, Dia’s Ryman exhibition—his first in a New York museum since a 1993 MoMA retrospective—is illuminated entirely by daylight. Seeing his nuanced variations on the monochrome under these highly changeable conditions, below skylights veiled in billowing white fabric and dangling light bulbs that remain unlit, gives rise to all sorts of perceptual guessing-games.