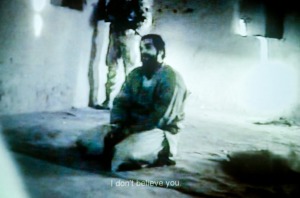 Political art has changed over the past 50 years. Unlike the protest art of an earlier era, much of the most interesting new work feels slippery and evasive, as if reluctant to speak its mind. In part, this is a reflection of different, though not necessarily evolved, thinking. We’ve abandoned old beliefs in utopias, in visions — some would say hallucinations — of a society built on absolute good for all, in which art plays a declaratively positive role. The 1960s counterculture, even at its most anarchic, was based on such beliefs and visions. And that counterculture is long gone.

Which brings us to “Laura Poitras: Astro Noise,” at the Whitney Museum of American Art, an engrossing solo show by an artist best known for three remarkable films documenting the United States government’s post-Sept. 11 “war on terror.” (She has also written for The New York Times.) The first film focused on the American occupation of Iraq; the second, on the detainment and torture of prisoners at Guantánamo Bay, Cuba. The third, the Oscar-winning “Citizenfour,” was a white-knuckle, you-are-there account of Edward J. Snowden’s leak of thousands of pages of classified National Security Agency documents in 2013, revealing mass surveillance at home and extensive drone wars abroad.