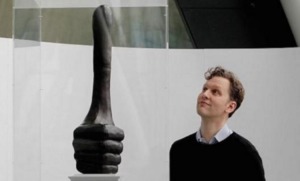 David Shrigley the Turner Prize nominated artist unveils his new commission for the Fourth Plinth titled, ‘Really Good‘ on Thursday 29 September 2016. The work was commissioned by the Mayor of London as part of the Fourth Plinth Programme, Really Good is the eleventh sculpture to stand on Trafalgar Square’s celebrated plinth, and will be the first major public art commission to be unveiled under the auspices of the new Mayor for London Sadiq Khan.

Really Good sees a ten-metre-high hand giving a thumbs up. Cast in bronze, with the same dark patina as the other statues in Trafalgar Square, the thumb is disproportionately long. Shrigley’s ambition is that this simple gesture will become a self-fulfilling prophecy; that things considered ‘bad’ such as the economy, the weather and society, will benefit from a change of consensus towards positivity.