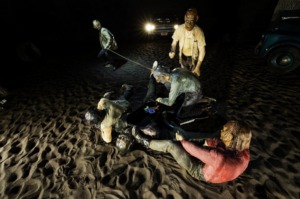 For nearly 40 years, Ed Kienholz’s Five Car Stud (1969-72), a dark installation depicting a brutal racist attack, lay hidden away in storage in Japan. It is now on public view in Milan at the Fondazione Prada, which acquired the work in 2012, soon after it was restored by the artist’s widow and collaborator Nancy Reddin Kienholz.

“Five Car Stud is a terrifying scene that reflects the contradictions of a society that professes equality and freedom but does not accept the other,” the curator Germano Celant, who has organised the Prada display, told The Art Newspaper over email. “Kienholz seeks to break down the certainties and controlled state of mind of members of the art-viewing public. He is attempting to destabilise their emotions, inviting them to engage in a reflection at once social and noble with respect to racial violence.”