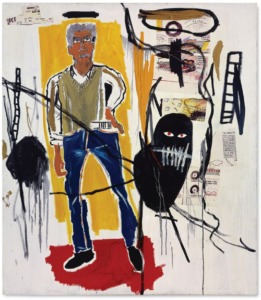 “CAN WE QUICKEN this up?” It’s lunchtime in New York and Larry Gagosian is hungry. It’s time for supper—or at least aperitifs—in Europe, where he recently did a three-week working tour of France, England, Germany and Switzerland, and it’s breakfast in Los Angeles, where last week he hosted his annual pre-Oscars opening at his Beverly Hills gallery, followed by a bash at Mr. Chow. So when food appears, served in his office on delicate Japanese dishware from his restaurant, Kappo Masa, four floors below, he’s ready. “Here, I’ll do that,” he says, commandeering the water and pouring it himself into a pair of ridged tumblers.

As for whether the art he deals in will endure, Gagosian says, “It’s hard to say if in a hundred years that work’s going to be regarded as well as you hope it will be,” he says. “You just don’t know. That’s why we call it the test of time.” Meanwhile, he will be at his desk, on the phone, hard at work. “I’ve built this monstrosity of a business, and I’ve got no choice,” he says. “It’s like Sisyphus. I’ve got to keep pushing the rock up the hill—and some days the rock is pushing me and some days I’m pushing the rock. But I have to keep it going. And I love it.”