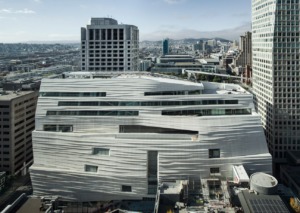 SAN FRANCISCO — Viewed head-on, the newly-expanded San Francisco Museum of Modern Art (SFMoMA) presents an odd progression of landmark architectural styles in no chronological order. First up is SFMoMA’s original home, a 1995 postmodernist red-brick building by the Swiss architect Mario Botta. Behind Botta is San Francisco’s very first skyscraper, Timothy Pflueger’s 1925 Art Deco PacBell building. And now, rising up somewhere between the two is the museum’s Snøhetta-designed, 235,000-square-foot expansion that, following three years of construction, will finally open to the public on May 14.

By all counts, the expansion is weird: its all-white facade, comprising 700 individually-molded fiberglass-reinforced polymer panels, ripples and curves in a way that is totally alien to the building in front of and behind it. This odd appearance, however, is a collection of carefully considered details that address the needs of a 21st-century museum in a way that Botta’s 1995 building did not.