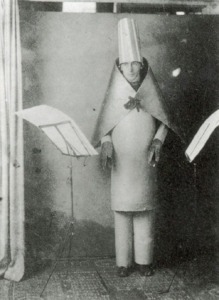 A new book on the movement draws lessons on the dangers of eclecticism.

In the final chapter of the art historian Maria Stavrinaki’s new book, Dada Presentism, she imagines the origin of Dada as an immaculate conception. “Who, in fact, did invent Dada?” she asks. “Everyone and no one.” Amidst the devastation of the First World War, with Enlightenment optimism in ruin, Dada arrived as a miraculous redeemer. Stavrinaki echoes the German Dadaist Richard Huelsenbeck, who wrote in his 1920 history of the movement that “Dada came over the Dadaists without their knowing it; it was an immaculate conception, and thereby its profound meaning was revealed to me.”