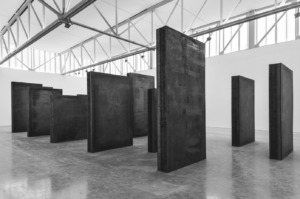 There’s never a shortage of mega-art in Chelsea: a stroll one morning this week encountered such gallery-filling works as Jordan Wolfson’s deranged, chain-operated marionette (“Colored sculpture,” 2016) at David Zwirner and Anish Kapoor’s mammoth, packed-earth “She Wolf” (2016) at Gladstone. And then there’s Richard Serra, whose double-gallery blowout at Gagosian is Exhibit A for material-intensity-meets-overwhelming-scale. There’s nothing else like it.

With this show, or rather, shows — the two venues are separately titled with the names of the sculptures they contain, NJ-1 and Above Below Betwixt Between, Every Which Way, Silence (for John Cage), Through — Serra is following the same playbook as his previous two-gallery presentation at Gagosian, which was held from October 26, 2013, to March 15, 2014: a walk-through sculpture on 21st Street and three others composed of enormous slabs of steel, standing and at rest, on 24th.