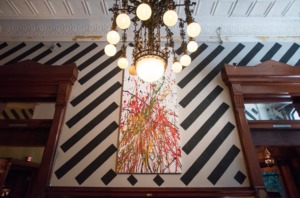 A kind of extended happening, or maybe a series of short ones, has gently taken over the Park Avenue Armory, one of the architectural gems of New York. Numerous moving parts, animate and inanimate, are involved, and they are all the doing of the British maverick Martin Creed, the first artist to be given the run of the armory’s entire first floor, where he created an exhibition titled “The Back Door.”

In the past, artists have mostly been limited, if that’s the word, to the armory’s 55,000-square-foot Wade Thompson Drill Hall. There, with greatly varying degrees of success, they have tended to orchestrate elaborately kitted-out spectacles, heavy with noise, lights or high-tech wizardry.

Mr. Creed has done something quite different. A jack of all mediums, including music, he is part court jester, part circus master, part philosopher and also something of a Luddite. At 47, he has spent the past two decades setting off subversive vibrations along the fine lines between art and life, art and silliness, and art and provocation, melding Conceptual Art smarts and Minimalist literal-mindedness. Simplicity, modesty and obviousness appear to be his bywords, all the better to disturb the assumptions of preciousness, skill and aloofness basic to art.