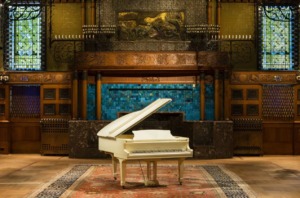 Everything is fair game for the Turner Prize-winning artist in a new show at the Park Avenue Armory.

The Turner Prize-winning British artist is known for his singular (sometimes gross) sense of humor, sparking debate with seemingly mundane, Duchampian conceptual actions and for nabbing Britain’s coveted Turner Prize by rigging a light switch with a timer. Now, he’s just opened his largest show in the U.S. to date, “The Back Door,” which runs at the Park Avenue Armory through August 7, and the jury is out on what New Yorkers will make of Creed’s Punch and Judy act.

The English-born, Scotland-raised artist (though he hesitates to call himself that) is the first to occupy both the building’s massive Wade Thompson Drill Hall and newly renovated historic rooms. But unlike many that have shown at the Armory before him, Creed has chosen not to fill the hall with a larger-than-life, flashy display of high production value—though he’s certainly capable of such work.