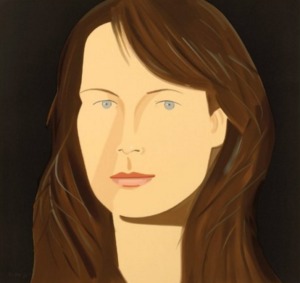 In this extensive interview excerpted from the revised and expanded edition of Phaidon’s monograph Alex Katz, the New York-based painter sits down with his longtime friend Robert Storr, the now-outgoing dean of the Yale School of Art, for a lively, winding discussion about the artist’s influences, concerns, and life history.

You once said that a jerk is somebody who competes with the wrong guy. [laughs]

Those Klines and de Koonings had so much big energy; I wanted to make something that knocked them off the wall. Just like that—more muscle, more energy. They set the standard. It wasn’t the style I wanted to follow, but I wanted to paint up to their standards. So I took a figurative work and I said, “Well, I want a figurative painting on the scale of the Abstract Expressionists,” you know, on a big scale.

No one had been there, so it was really exciting. I had a painting in my first show at Marlborough (New York) in 1973, which was a group exhibition with Franz Kline, and Clyfford Still, and others. I put a flower painting in from the late 1960s and I was really scared that it was going to look like a piece of crap there. But it didn’t. It held up.