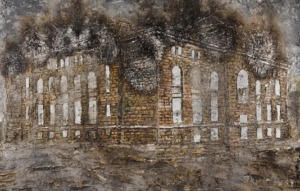 Sotheby’s says ‘unprecedented interest’ with buyers tuning in to postwar masters’ attempts to use work to confront history.

For years, contemporary art sales at the world’s leading auction houses were dominated by the works of American and British artists. When it came to eye-watering amounts of money, paintings by anglophone figures including Andy Warhol, Jackson Pollock and Francis Bacon were typically the headline-makers.

But in what has been described as a “sensational development”, Sotheby’s – the highest value auction house for contemporary art sales in London– has said German postwar masters are now defining the scene.  More than a quarter of the 64 lots at Sotheby’s next big sale of contemporary art in March will be masterpieces by the likes of Georg Baselitz, Gerhard Richter, Sigmar Polke and Anselm Kiefer – all of which are due to go on public display from 23 February.

“There is an unprecedented interest being shown in German contemporary art,” said a Sotheby’s spokesman. “To have such a representation from one country is remarkable given today’s globalised art world.”