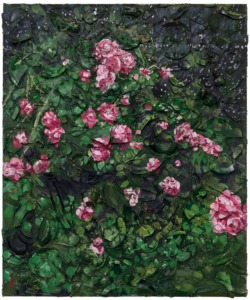 Julian Schnabel has occupied many roles through the years: the default figurehead of the star-studded 1980s art world; the fall guy for that era’s particular brand of monied hedonism; an Academy Award-nominated filmmaker; for some, the greatest painter of his time — and others, the most overrated. He’s experienced ups and downs with critical and public reception: The critic Raphael Rubinstein has praised the “messy grandeur and devotional passion” of his paintings; Morley Safer, in a “60 Minutes” segment from 2008, dismissed Schnabel as the “poster-boy for the Me Generation.” And now, after several years of neglect from American galleries and museums, Schnabel is having a bit of a renaissance, with a recent retrospective at the Aspen Art Museum, a solo show opening this week in New York at Pace Gallery and a new film project about Vincent Van Gogh in the works. At 65, Schnabel has effectively transcended the sea of commentary that has surrounded him for the last four decades. He’s not going anywhere, like it or not.