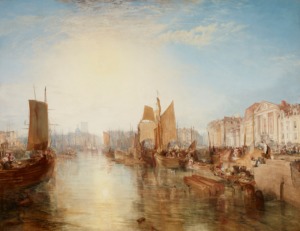 An exhibition at the Frick Collection unites for the first time three of J.M.W. Turner’s 1820s port paintings, created in an age of newly open borders in Europe.

As Ian Wardropper, director of the Frick Collection in Manhattan, remarked at the preview for the new exhibition Turner’s Modern and Ancient Ports: Passages through Time, J.M.W. Turner created his 1820s seascapes at a moment of shifting borders. Travel restrictions due to a fear of invasion had meant that the English Channel could not be crossed between 1797 and 1815, but with the defeat of Napoleon at Waterloo, the barriers were lifted. “In celebration of this freedom of travel, he started making these sketches and traveling around the continent,” Wardropper said.

While it’s always a pleasure to take a long look at a Turner painting (if you’re a fan of 19th-century luminosity, that is), any exhibition is necessarily viewed from its current moment. The opening and closing of international borders and the impact of those decisions on art are especially relevant right now, in the wake of Trump’s travel ban in the US and Brexit in the UK. Turner’s monumental port painting of Cologne features a dog and disused fishing net whose solitude is about to be disrupted by a docking boat of well-coiffed tourists. And even as he exhibited this sunset-lit arrival in 1826, many of the old buildings and walls it depicted were being demolished to make way for development.