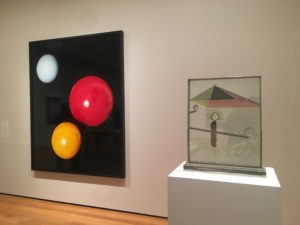 Less than a week after President Trump signed an executive order banning citizens of seven majority-Muslim countries from entering the United States, the Museum of Modern Art in New York has responded by installing a dozen works by artists from those countries, including the late Iraqi-born architect Zaha Hadid, the Sudanese master Ibrahim El-Salahi, and the young Iranian painter Tala Madani, in the galleries devoted to its permanent collection.

Alongside each work is a placard that reads:

This work is by an artist from a nation whose citizens are being denied entry into the United States, according to a presidential executive order issued on January 27, 2017. This is one of several such artworks from the Museum’s collection installed throughout the fifth-floor galleries to affirm the ideals of welcome and freedom as vital to this Museum, as they are to the United States.