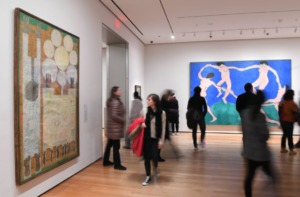 This week, New York’s Museum of Modern Art (MoMA) rehung its prized Modern galleries, swapping out works by greats like Henri Matisse and Pablo Picasso for works by artists from the Muslim-majority countries affected by President Trump’s travel ban.

It’s not exactly as if MoMA has draped itself in a “Muslim Lives Matter” banner. Still, this rapid response, conceived by curators Ann Temkin, Jodi Hauptman, and Christophe Cherix over the weekend of cresting outrage over Trump’s executive action, stands out as an unusually direct statement on current events for a major art institution—appropriately enough, since this is an alarming time. The Art Newspaper reports that the curators plan to integrate still more works in coming weeks.

The point is this: These artists are important as examples not just because they are very accomplished figures who also happen to be from Muslim-majority countries. Given its proper historical context, their art rebuts the “clash of civilizations” stereotype of Islamic culture as chained to a past that is innately hostile to being integrated into the present.

We can’t have enough of those examples now. MoMA has started a conversation. It seems more urgent than ever not to leave it there.