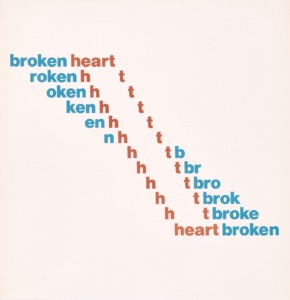 Works by Scottish poet Ian Hamilton Finlay and Brazilian poet Augusto de Campos have joined the Getty’s collection and will go on view in an exhibition opening next week.

Tug, fug, chug, glug — such are the rhyming words used by the writer and artist Ian Hamilton Finlay in “Poem with 3 Stripes,” one of his earliest collage booklets and a playful example of concrete poetry. The book, published around 1963, speaks to Finlay’s interest in tooting tugboats, which in turn reflects his fascination with the sounds of words regardless of their meaning. That emphasis on sound, coupled with the effect of how letters appear as printed graphics, were primary concerns of the makers of concrete poetry, which emerged in the 1950s as an international movement out of South America and Europe.

Finlay’s book is one of a series of concrete poems acquired by the Getty Research Institute (GRI) earlier this month, by the Scottish artist as well as Brazilian poet Augusto de Campos. As the museum’s curator of modern and contemporary collections, Nancy Perloff, told Hyperallergic, “Concrete poems are material objects constructed of component parts that can include letters, words, phonemes, syllables, and typefaces. By rejecting traditional syntax and utilizing graphic space for both structure and meaning, concrete poets made the sound and shape of words their explicit field of investigation. Concrete poetry made language visible.”